A Lesson in Transformation

I have already written at length my thoughts about the Transformers and, more specifically, about the Michael Bay interpretations of the beloved franchise. With the recent release of the third movie, I have been hesitant to write up anything about it because I feel as if I don't really have anything new to say. So, I write now with the risk of repeating myself or typing up a straight, boring review of the film (which I have no real desire to do so). This is mainly because response to the new flick, Transformers: Dark of the Moon, echoes the response of the previous entries in the series (though, this divisive nature of audience v. critic response seems to be more in step with the second movie than the first); that is, it's a big dumb action movie. But a description that bothers me the most is "it's just a Transformers movie." The problem here lies in a socially defined term that is simultaneously casting judgment on a series of movies as well as a franchise that means and can accomplish so much more than what three shitty movies can dare to do. What bothers me is that "Transformers" has come to be defined as something new and foul in the post-Bay trilogy world and I fear the franchise has been irrevocably damaged. As a "G1" Transformers fan ("G1" is a fan term referring to the original 1984-1988 animated show), my frame of reference starts with that original cartoon. As I've said in a previous write up, my goals for a Transformers movie are probably much more achievable than your average raving fanboy: all I ask is for a Transformers movie to be as dumb or less dumb than the original cartoon (by "dumb" I mean it was dumb in its simplicity and in its ignoring of the intricacies of modern life for the sake of allowing gigantic transforming robots to fight a centuries-long battle on earth with little human interference. The movies are just brain-rattlingly devoid of intelligence). I don't mean to belittle the original show––I love that show (and I use "love" concretely, not as a throwaway expression of appeal that many use it for)––but I know the terms of its creation, of its purpose in 1980s America. For Hasbro, it was never meant to be anything more than a half-hour long toy commercial.

The problem is that they hired writers, and even though the writers approached it from the same angle as Hasbro, it was their job to flesh out the world of this toy line and imbue characters--ones with bobbing faceplates and windshields on their chests--with enough personality and individuality to distinguish this red car from that yellow car, and so forth. These are toys that kids are going to want to buy and take home and have them interact as they do on the show, because that's what characters do and that's what children do when they play with action figures. Sure, I had them transform as much as possible and had them shoot machine guns at each other, but there was always an impetus for the action, there were always winners and losers, there were always heroes and villains and those lines were drawn by the writers of a show meant to sell those toys to me. As writers, despite knowing full well that they had to feature a toy in all of its glory per episode, they unknowingly created characters that children at home cared about because that's what writers do. Again, as I've said before, I believe the charm of the original show was that the viewing audience saw, week after week, that these robots from outer space, albeit embroiled in a bitter, brutal battle, were much like us. There were the smart ones and dumb ones, the physically impressive ones and the quiet ones, there were the cowardly ones and the brave ones, all interacting as a family created from friendship and common goals. In the robots we, the children, saw familiarity, not in the silly, yellow-booted humans that befriended them. The robots were the ones with flaws and those were exploited and then they were redeemed and a lesson was learned (after a hearty laser battle, of course). The Transformers became a sort of modern mythology, tales used to explain humanity to a specific audience using larger than life characters in exaggerated circumstances. Individual stories may not line up exactly, but, on the whole, the mythos is stable. 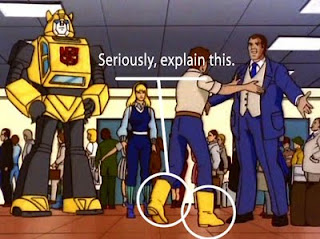 That is what the Transformers are. It may not have been the intent, but that was what the creators broadcast to our television screens (they learned this horrible lesson when they killed off Optimus Prime in the 1986 animated film The Transformers: The Movie).

The show was simple but effective, and though it was dumb it had a heart that couldn't be ignored. That's what I wanted out of the Transformers movies and never really got. What I got were stupid action movies that lived from fight scene to fight scene with everything between acting as a rapid inhale rather than the emotional cool down that they needed to be. More than anything, however, I was given Transformers movies that weren't about robots from outer space. The titular robots became scenery that talked and turned from ragged, battle-weary warriors into shiny, blemish-free vehicles, driving around stories that had no heart and made no sense (again, I turn to the second movie as the shimmering example of this). That is what "a Transformers movie" has become: action without heart, motive, or character. That is not Transformers (truth be told, the action was the least impressive aspect of the original cartoon). In a sense, Michael Bay and his lot inverted what Transformers meant and took that as its new definition, effectively changing in three movies what an incredibly popular 1980s cartoon and toyline helped create in the public eye. At least to the layman, Transformers before the Bay movies just meant "toys that changed from robots to cars." That's a completely understandable and acceptable definition: it wasn't wrong. But now, "Transformers" have come to mean what? Certainly not character, moralistic tales, or friendship. I urge people to understand that each of Michael Bay's Transformers movies are anything but "another Transformers movie" movies; they are, more accurately, "another Michael Bay movie" movies.


With that in mind, I enjoyed Transformers: Dark of the Moon, and proudly declare it to be the best of the trilogy, if only because of the elements discussed here (I'm not saying it hit the jackpot, but of the things that define Transformers for me, it came the closest). With the writers of the first two flicks gone, the new writer (one Ehren Kruger, who admittedly worked with the original writers on the second film, but I have a feeling there was very little writing done for that movie at all) seemed to look around and say, "Hey! These robots are characters, too!" For the first time in the Bay series the robots mattered; for the first time the story upset our expectations and put something at stake for the robots. This new flick had a feint beat of a tiny heart, and I don't know who to thank for it. 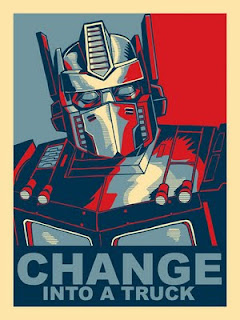 As further television shows and comic books have shown, the franchise can be used to tell wholly mature stories full of political intrigue and emotional character drama with affective allegory and spits of philosophy, not that these qualities should dictate the content of the movies. What isn't true is that the Transformers can not have good, solid, well-told stories because they need bristling, ear-bursting, hour-long action scenes. Just stick to what made it a hit in the first place and if you want to take it deeper, take the self-evident irony of the entire premise and run with it: the Transformers are highly sophisticated bio-technological entities that are fighting an utterly barbaric war; these robots from outer space are, in fact, more primitive than the humans inhabiting the planet which they have made into their new battlefield––their gimmick (transformation, of course) is a tool of their war. But I won't demand that. Just trust the robots to do the job that Bay and company expected a frenetic, potty-mouthed, former TV Disney star and a blank-faced model to do instead.

D. Bethel
Depending on the time of day, I write and draw the Long John webcomic (updates once a week at longjohncomic.com), produce the weekly For All Intents and Purposes podcast (updates Thursdays at forall.libsyn.com or subscribe on iTunes), and teach writing and rhetoric at Sacramento State University and the local Art Institute.